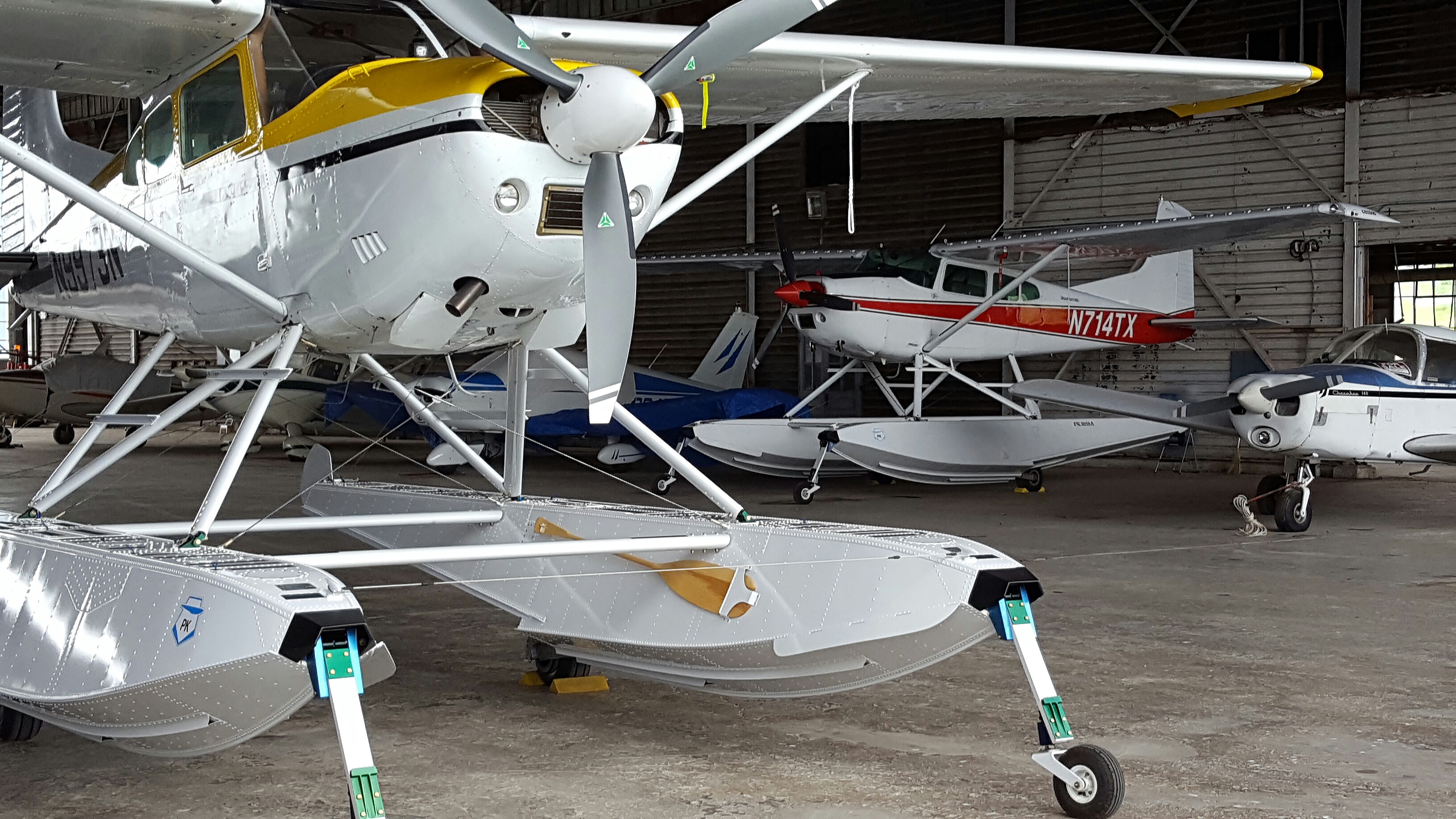 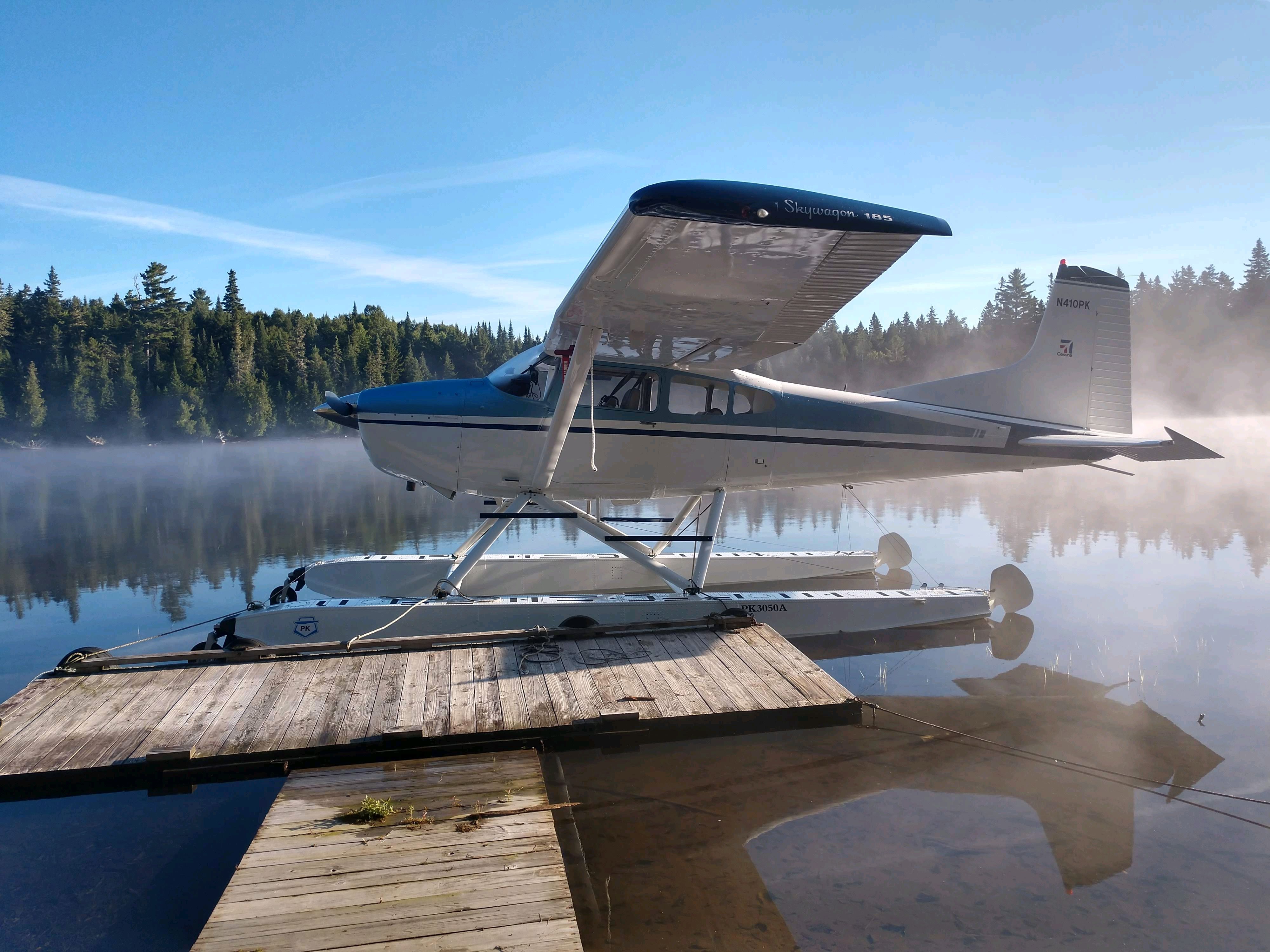 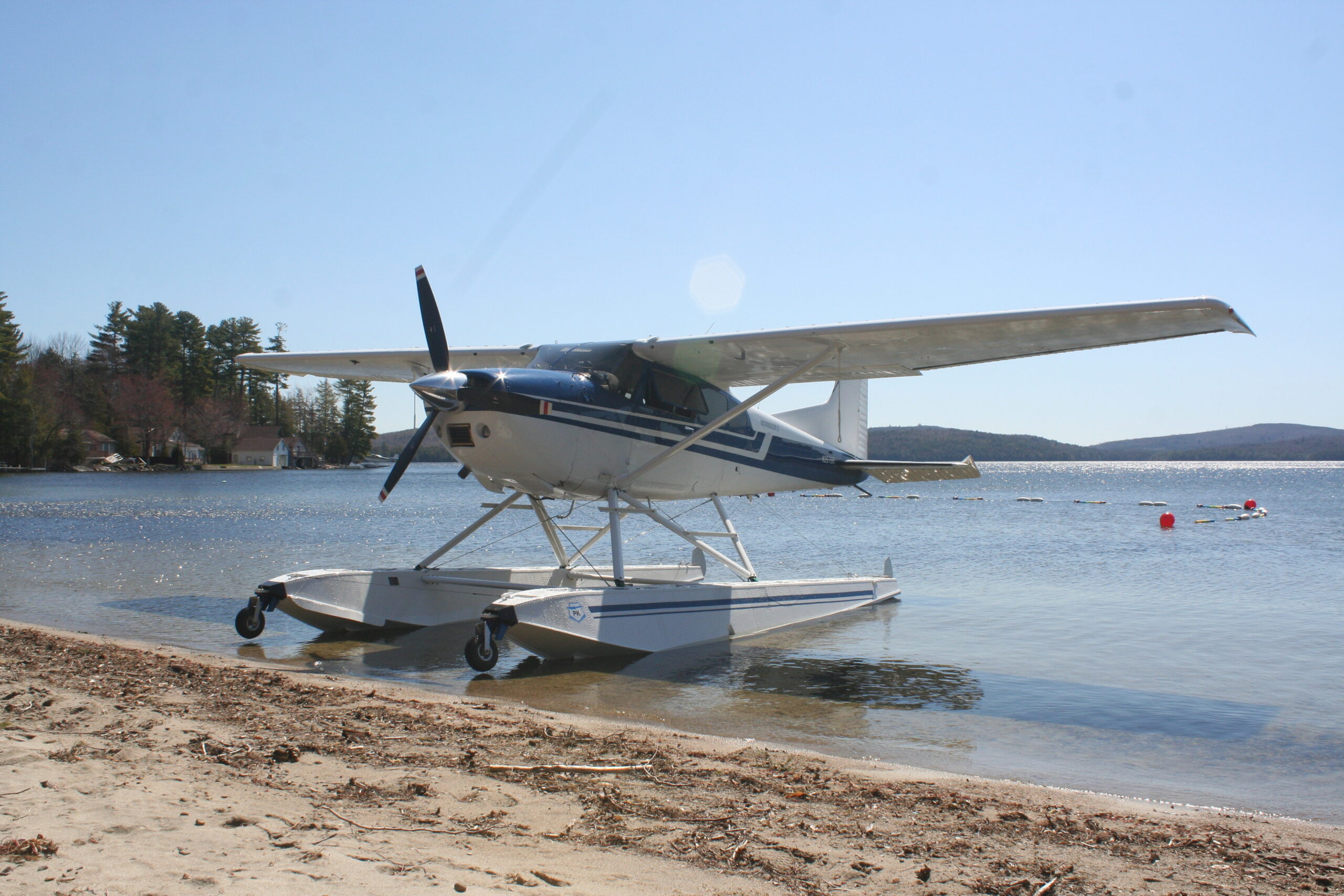 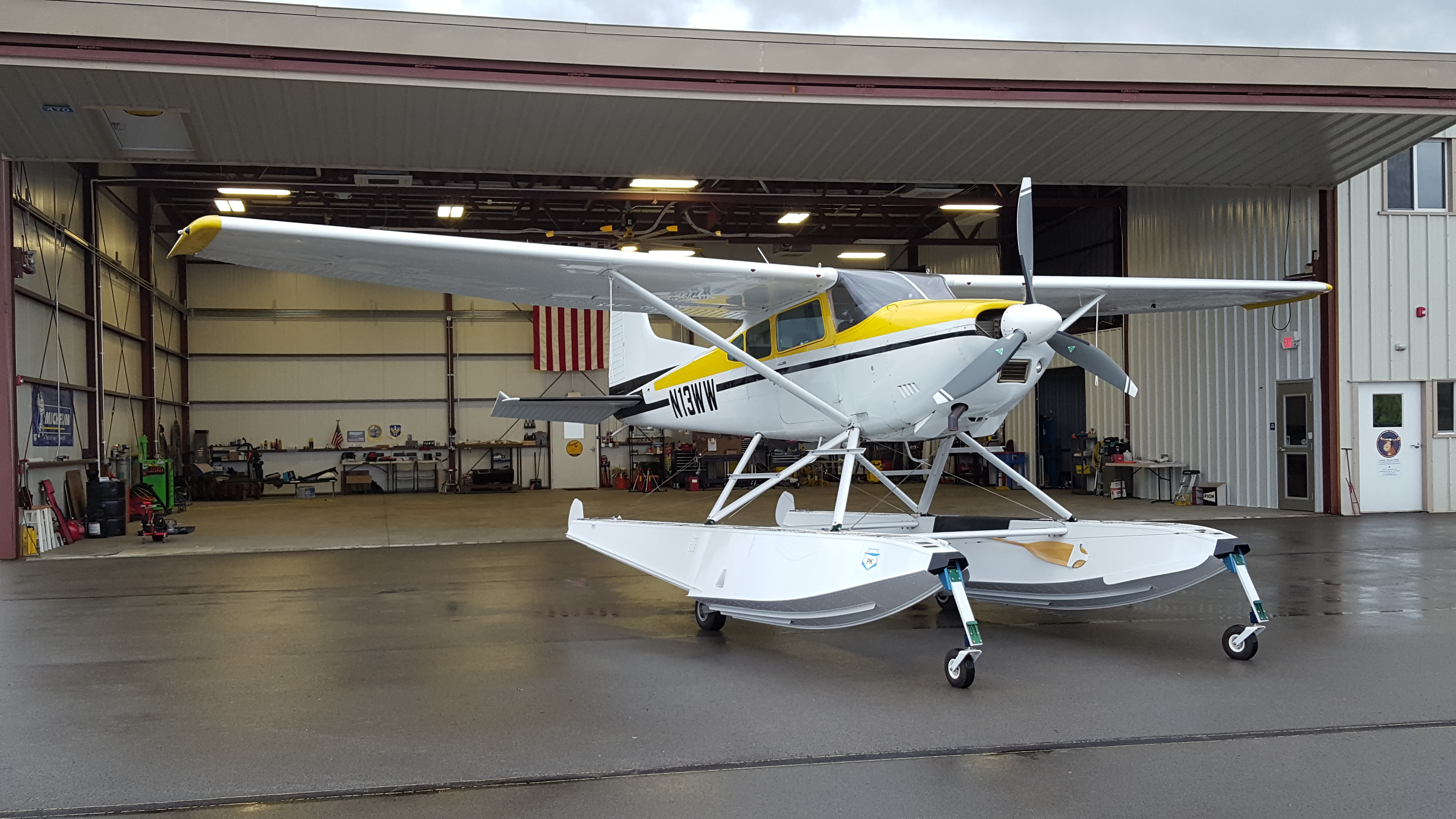 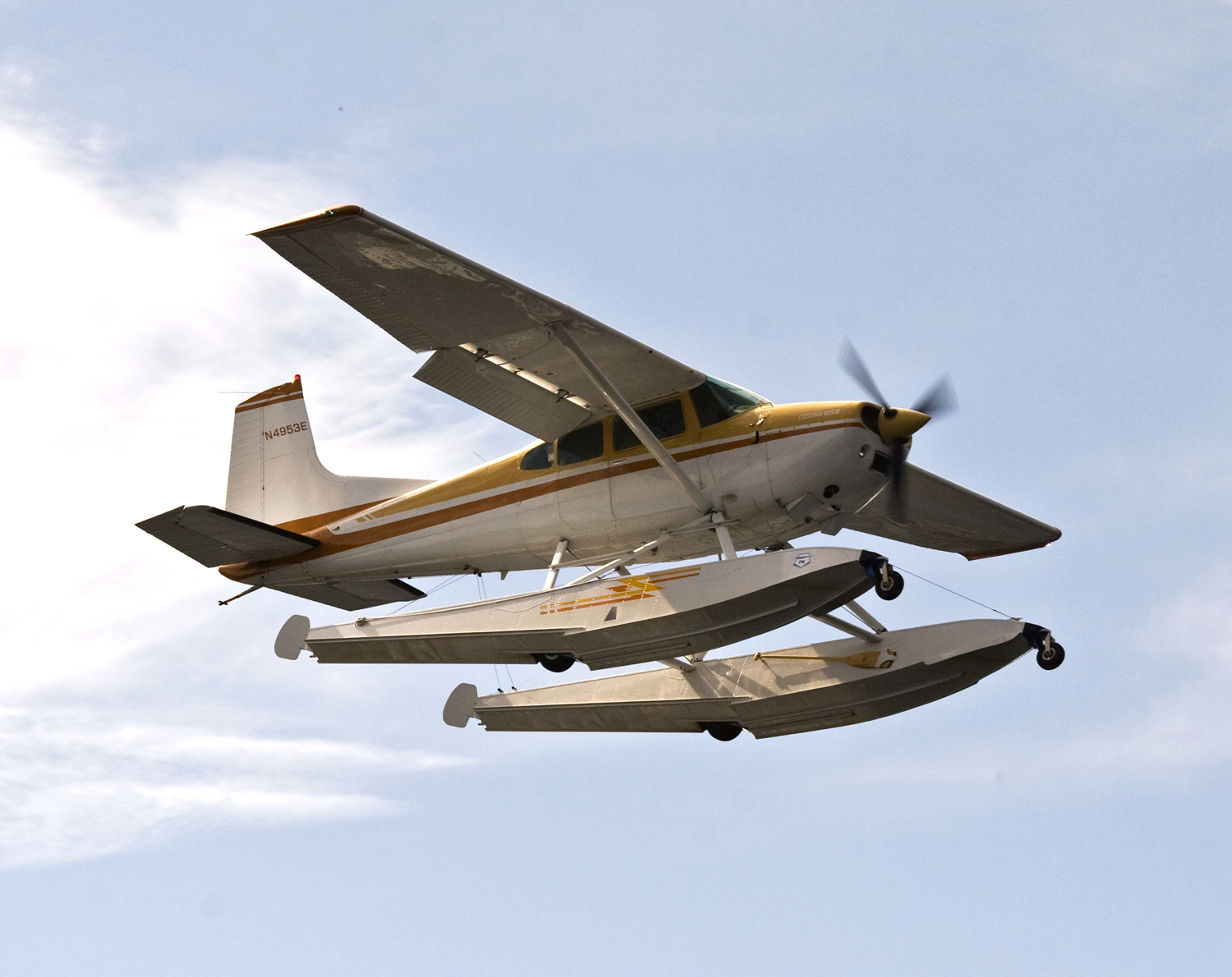 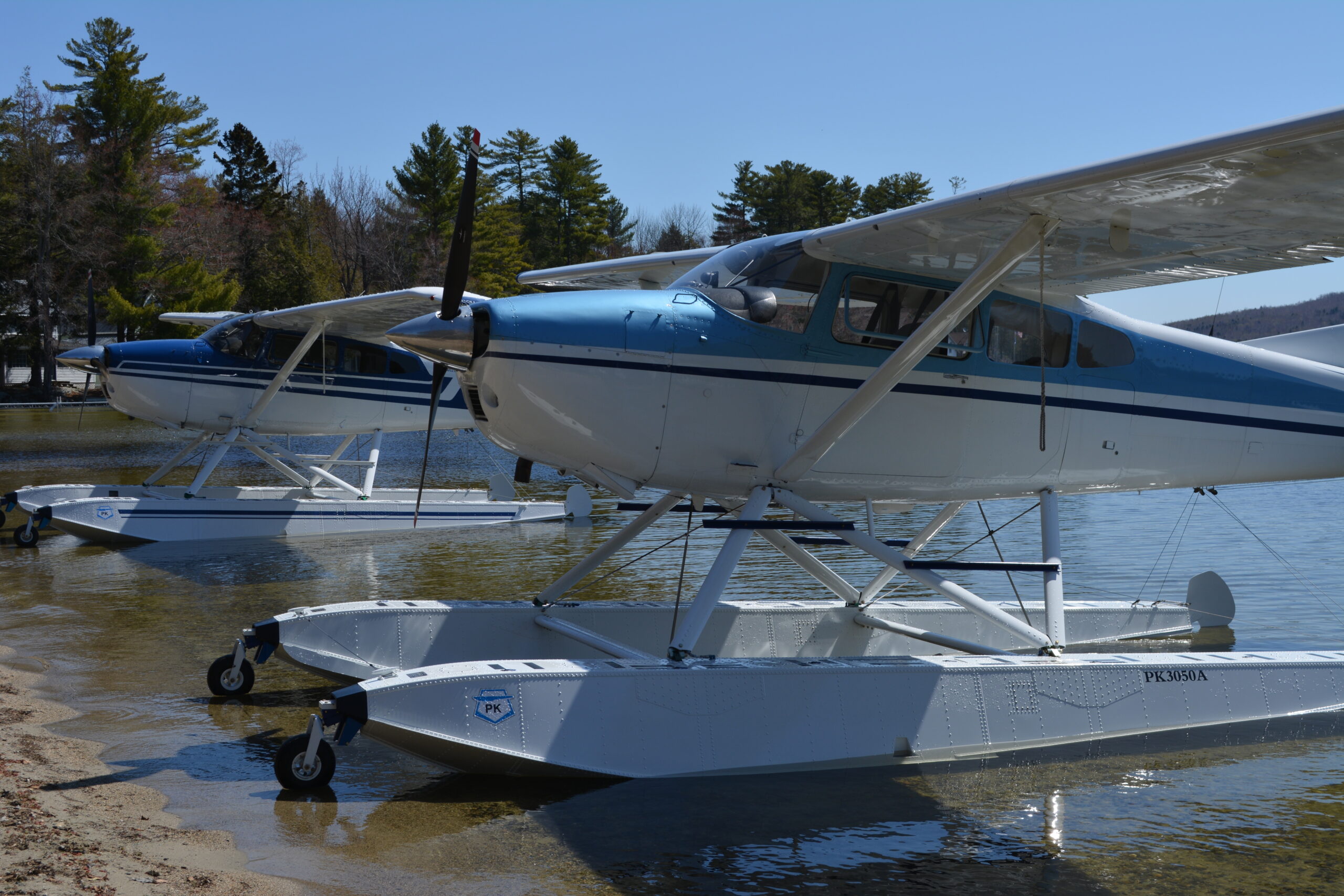 This PK 3050A is the lightest amphibious float in its class. These floats weigh 579 lbs, measured on FAA approved scales. Once installed on the aircraft there is a net gain of approximately 449 lbs, after subtracting the weight of the original landing gear. PK Floats, Inc received STC certification on April 1, 2005 for the Cessna 185 (STC # SA00213BO).

FLOAT DESIGN
The basis for design for the PK 3050A was the PK 3000, but many new features have been incorporated into the new amphibious design that is the PK 3050A. The spreader bar lug of the 3050A is CNC machined from aluminum and anodized for corrosion protection. This float features stainless steel swing arms on the main gear and composite leaf springs with shimmy dampeners on the nose. The 3050A has a double puck braking system that will greatly improve braking power and reduce braking distance. The hydraulic system is installed in the left hand float compartment. The installation of the power pack in the float reduces plumbing, therefore reducing weight. There is a robust keel extrusion that is nearly ½”x½” in cross section that runs the full length of the float. The 3050A features full length inboard and outboard half-hydroboosters that reduces spray. There are also four hydroboosters forward of the step, which improve takeoff performance. This combination of keel, hydrobooster and half-hydrobooster forward of the step create a very strong bottom structure.

CORROSION PROTECTION
Prior to assembly, all aluminum components, including skins and bulkheads, are chemically treated and then epoxy primed. During assembly, the floats are fully sealed to create a watertight structure. All dissimilar metals are isolated to prevent corrosion. Following assembly, the exterior of the floats are cleaned and painted with two coats of aluminum pigmented lacquer or color matched to the plane with urethane paint.

MAINTENANCE & REPAIR
The PK 3050A float is manufactured using flat sheet aluminum, there are no specially formed bottoms, or stamped bulkheads. Therefore skins can easily be replaced in the event of severe damage. This also means that in the event of an emergency, field repairs can be made with ordinary hand tools.

PERFORMANCE
The basic hydrodynamic configuration of the float is a deep-V variable deadrise design. The high sternpost angle permits small radius turns and freedom during aircraft rotation at takeoff. Rough water operations are unsurpassed because of the deep-V design of the bottom. Takeoff distance on glassy water is reduced, because of the addition of four hydroboosters, even in high density altitude conditions.

The first Cessna 185 rolled off the production line in Wichita, Kansas in 1961 and over the next 14 years, the factory turned out over 4,400 of these aircraft. By the time production was halted in 1985, the Cessna 185 was truly a legend. No other single engine piston aircraft could operate on floats, wheels, or skis, from unimproved runways, with such speed and load carrying ability as the 185.

Nearly 35 years have passed since the last Skywagon left the factory, and it has become common to find these aircraft with 10,000 hours or more. Many have stories to tell, flying in and out of every remote corner of the globe. It is estimated that 2500 are still registered in the US and Canada. It is becoming increasingly rare to find a pristine Cessna 185 with no damage history and low airframe time. Clean examples demand a premium in the used marketplace.

While there may be newer, sleeker, more modern aircraft available, nothing comes close to matching the strength, versatility and capability of the Skywagon 185. As the Old Milwaukee commercial said “It just doesn’t get any better than this.”

But it just did. PK Floats, Inc., known for building the toughest, most reliable seaplane floats has recently delivered the first Super Skywagon to a customer in Texas. This transformation of a utilitarian workhorse into a highly refined amphibious float plane was carried out to the customers’ exact specifications. The end result is a better aircraft than you can buy anywhere, period.

This project started with locating an airframe. This particular aircraft had under 1500 hours total time and no damage history or corrosion. The aircraft was disassembled completely, cleaned, and inspected. Anything that needed to be addressed was noted.

The engine was upgraded to a Continental IO-550 with a new McCauley 401 propeller. The fuselage was then stripped, etched, primed, and painted with a four color scheme. New glass and interior was installed. A full Garmin avionics package was installed next. Finally new PK 3050A amphibious floats were installed and the aircraft was test flown.

The Super Skywagon with PK3050A amphibious floats has a useful load of about 1000 pounds. The aircraft will break the water in a little as 7-8 seconds. This 185 will cruise at and honest 120 knots and with long range fuel, a range of 650 to 700 miles can be expected. The amphibious floats add versatility and practicality. From better fueling options on a long cross-country to storage in a hanger, safely out of the water. In the world of float flying, the Super Skywagon is the pinnacle of performance.

Call Patrick at PK Floats to learn more about building a Super Skywagon or to talk about the toughest seaplane floats available for your aircraft. Quality, craftsmanship; every float, every project, every time.  207-446-5262 or 207-794-0180